People don't like to talk much about death. When you first think of death do you think about joy or do you think about sorrow and tears? Honestly I think about the latter more than the former. Death and dying scares me. Just recently I thought I might have come close to it.

Well almost two weeks ago I decided to go to Disneyland and Disney California Adventure one last time because my family is moving to Iowa. Earlier that morning my stomach had felt a little queasy but I figured that was because of nervousness and excitement. I drove down there, rode two rides and was waiting in line for the third ride when all of a sudden my vision became hazy. For a moment I thought it was because the lights were dim but then I knew something was dreadfully wrong. My eyelids began to feel very heavy like I couldn't lift them and I became lightheaded and felt like I was going to faint. My knees started to give way. Luckily my two friends realized something was wrong and called for help. They held me up because I could not stand myself. I passed out. When I came to I was being seated in a wheel chair and my blood pressure was extremely low. Sitting helped and the nurses decided to cancel the paramedics coming to take me to the hospital. They rushed me to the nurses station and my blood pressure continued to climb back up. I'm not sure why this occurred as it wasn't like I hadn't been on the rides before. I had never had an issue like this before. I was super scared. I was brought home by my parents. I'm feeling fine now but after seeing the doctor I still have no idea why it happened or what happened exactly. Going to see a cardiologist once we get to Iowa. I pray it isn't a heart condition.

Anyways it made me think about my mortality and death in general.

On top of that my pastor in Iowa's father passed away recently and I listened to the Sunday Sermon with my family which was on the subject. He talked about how his father was ready for death. How he would tell everyone it's okay. Hearing that made me cry because I wondered if I would have said the same thing that day at Disneyland. I don't think I would have. That led me to ask myself why? Why wouldn't I? I started to doubt if I was saved. Wondering if I'm truly saved by grace through faith in Jesus Christ alone who died on the cross to take my place at Calvary. Wondering why death and dying scares me. Why don't I have joy and peace that I would be with Christ?

This Thanksgiving let us all be thanking God that he has given us another day to live. Time is short and precious. Don't waste your life. Don't wait to do anything or think you can do it a different day because eternity could just be seconds away.. Go share the Gospel- the way to eternal life with someone today.
Posted by Michelle Miano at 12:48 PM 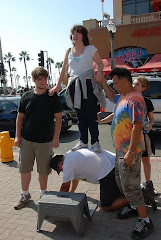 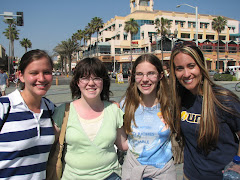 Hollie, Me, Amanda, and Trish